Market Update - The Colors Of Autumn 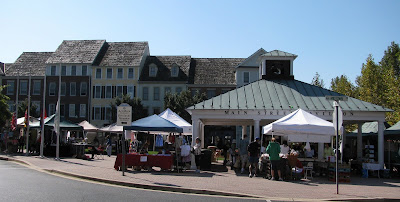 Today was a glorious day at the market! Sunny, cool, just perfect. Plus, it was our annual Pot Luck, but more on that in a sec.

I titled today's post "The Colors of Autumn" because it now feels like Autumn, and the colors are amazing. 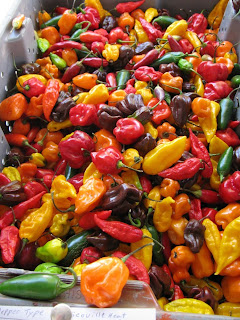 Once again we have Farmer Mike's bin of hot peppers. He is quite proud of these babies, and continues to taunt me with them because he knows I am a wimp. 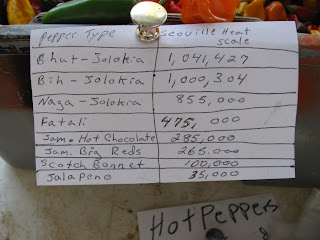 Check out the heat scale on these. Uh-uh. No way.
(I like the Fatali name - same root as 'fatal'? Ya think?) 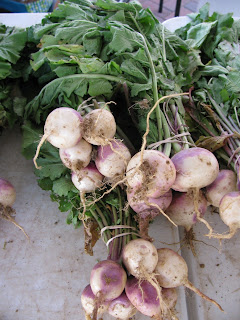 In keeping with the naming conventions (maters, taters, cukes), these are turn-ups. I do not eat these. Blech. 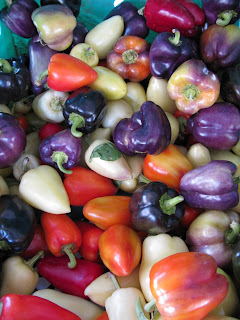 Sweet peppers. And from last week's lesson, we know these are all the same type of pepper, just at different stages of maturity. I passed that test. I was actually quizzed today on several veggies. Bet you did not know there'd be tests, huh? Not for you, but for moi. 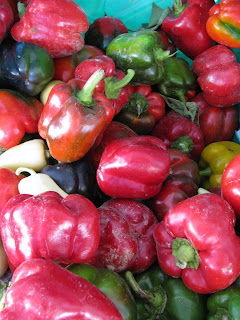 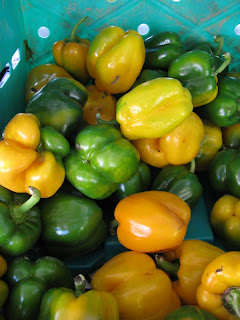 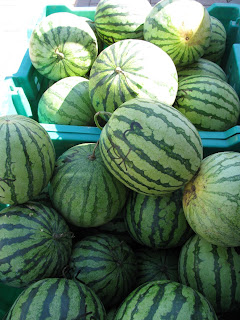 Watermelons. I am not sure if it's these, but some of them are yellow on the inside, not red. 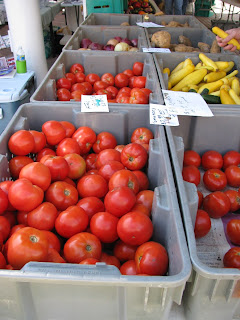 Here is a row of maters and squash and taters. Those sweet potatoes are white/yellow on the inside like 'regular' taters, not orange. 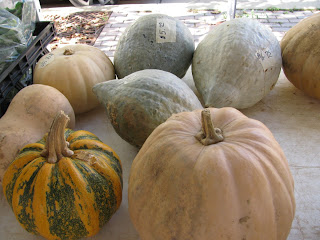 Cooking pumpkins. The bakery buys these to cook and make their pumpkin pies. 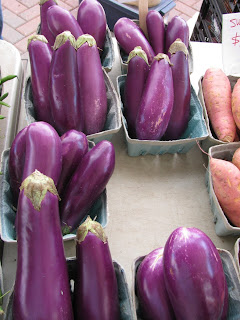 I thought these eggplants were a pretty color - not the usual deep purple. 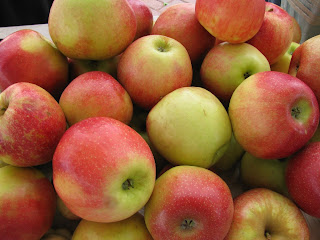 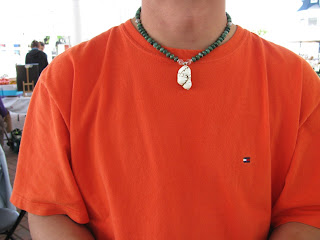 Moving on from the veggies to the next part of the show, this is Jason, the jeweler next to me from whom I bought my necklace last week. He and his wife make such pretty things. Today Jason was wearing this necklace to show that guys can wear them too. I think it looks good on him.

But then I asked him to wear this one, and he refused me. REFUSED! Too girly. There is apparently a limit to what a guy will wear. ;-) 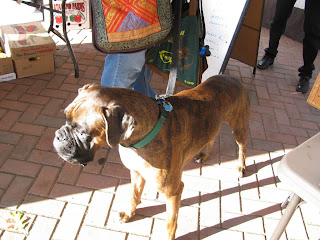 On to the critter portion of the program. This guy is a weekly visitor, and he is gorgeous, er handsome! His Mom said he was a breeder rescue - the runt of the litter and not good enough to show or stud. She fostered him until she decided to keep him. He is such a good dog, as I believe the runts of litters usually are. And he is so soft! His forehead is like silk! She said he gets fish oil to help with skin conditions. It works! 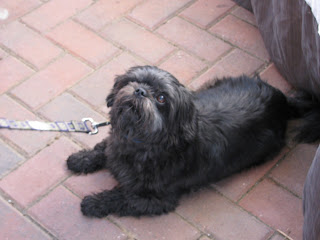 Here is another sweetie, and also a rescue. Part Shitzhu. 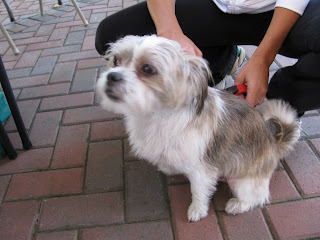 Another part-Shitzhu rescue! Sorry her face is a little blurry, but she was a wiggler! 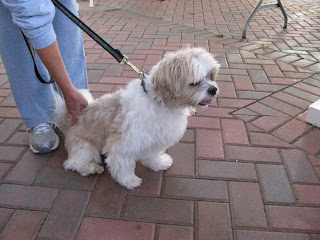 And ANOTHER! Three part-Shitzhu rescues all in a row. 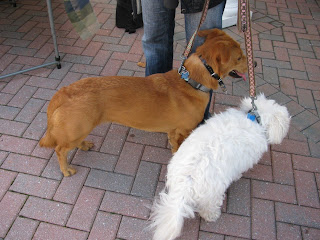 The brown dog here is part Corgi. He/she is very low to the ground!

Here we have a praying mantis. I drew a red line so you could see it better. Farmer Mike said it is a female, because she is puffy and ready to lay eggs.

Lesson du jour: When the farmers find some mantis nests/egg whatevers on the plants, they take them and keep them in the refrigerator for a few weeks to simulate the winter. Then they put them in the greenhouses and when they hatch, the larvae eat the mites on the plants. Now THAT is all-natural farming! 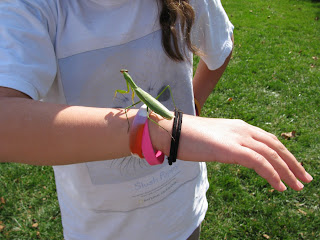 Here is the same mantis on an arm. She was quite the entertainment for the kids!

In other entertainment news, back to today's Pot Luck. My, my, my but can these people cook! We had crock pots with soup and chili; dumplings (Chinese), Samosas (Indian); Tabouleh; Middle Eastern Rice (with and without meat); Poblano Pepper Poppers (mine); Panzanella salad (with fresh maters from Farmer Mike and fresh Rosemary bread from the bakery); Hummus; bagels & cream cheese & jam; sausage & cheese; and a fruit tart. Can you say STUFF-ED?! OMG, I may never eat again. Until tomorrow.

We had another excitement today, too, and not a good one (the event itself) but it had a good ending. One of the kids came by and asked me the intersecting street names, and I thought nothing of it until someone told me a woman had tripped on the sidewalk, fallen, and had broken a tooth and banged up her lip. They called 911, who told her to not move until they got there, so we were all waiting for the paramedics to arrive. Meanwhile, one of the other market customers happened by, went home and told his wife, who is A DENTIST! She came running out with gloves and all sorts of dentist stuff and took care of the woman. She advised her what to do about her tooth, etc, and it was just amazing and heart-warming to watch. The paramedics got there and made sure she ONLY hurt her tooth - no head trauma, twisted ankle or anything else. All is well, except she needs to go get her tooth re-attached! Phew - what a day!
As a side story, someone asked me to call 911 again to get a status of where the paramedics were (the station is like 2 miles away ...), and um, believe it or not, I had no idea how to use my phone. That's right - my relatively new Crackberry phone. I have only ever used it to call numbers from my address book, and did not know how to just dial a number! I learned, but how embarrassing!
I have been a lazy bum all afternoon and evening, and have not made a card today, OF ALL DAYS, as today is World Card Making Day. Oh, well. I'll try and make up for it tomorrow.
Tomorrow morning I have planned a most rare activity: I am going to the grocery store. That's right - I am on vacation, and I cannot fall back on my plan of eating breakfast and lunch at work every day, so I'll have to have food in the house. I know! I'll probably need a map or something to find anything. And maybe a clue. I'll let you know how that goes.
Thanks for stopping by!
Posted by Leslie Hanna at 8:17 PM