This week's challenge at Less Is More is to use the colors in our nation's flag to make a Clean and Simple (CAS) card. I saw this as a great opportunity to work on my CAS lack-of-skills, in addition to my fear of white space.

Since people in this great Blogosphere are from all over the world, it was suggested we could post an image of our nation's flag. So here's the flag of the USofA: 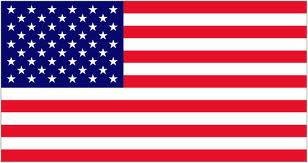 Hey, if I was from one of our Southern states, I might want to post a picture of the Confederate flag. I actually know some people who would do just that, too. Well, they would, even though the colors are the same, but I digress. 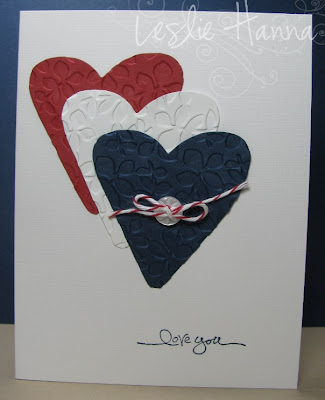 You'll notice I skipped right over the obvious star and stripe elements and went straight for the heart. This is my not-used-before-this-card die I got from Verve a while back, and I thought it was time to show it some love. I cut one in each of whatever red that was out next to my paper cutter, a scrap of white, and a scrap of what I think is Night of Navy. I embossed them with one of my oft-neglected embossing folders.

The most difficult part of this card was finding a white button. Seriously. I have a few, but they were all too big. I finally found this in a box of SU buttons.

I think one of the issues I have with white space is ... it's so ... white. The base of this card is white, but it's linen/textured, so I felt pretty calm about all that white space.

Okay, I'm off to link this up to the challenge, and move on to another one. Thanks for stopping by!
Posted by Leslie Hanna at 12:44 PM