So I had this idea. Yeah, things don't always work out as planned, eh? I really, really, REALLY wanted to give you guys another sneak peek at some things from the upcoming Holiday mini catalog. Well, actually I will give you a sneak peek, but, well, let's just say I need more paper. It's true. Look: 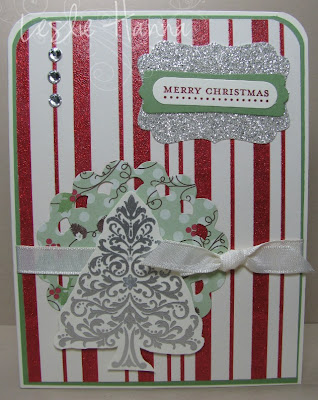 What the heck was that? THAT, dear readers, was my attempt to show you some of the new silver glimmer paper. It's like the red glimmer paper we offer, only it's silver. And man, is it ever SHINY! So I used it under the sentiment to try and tame it a little: 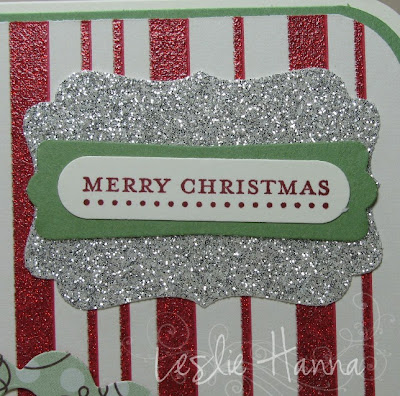 Then my struggle began. You see, I only bought one package of holiday papers, and it doesn't really lend itself to this shiny silver. The best I could do was this piece of shiny stripey red, so I went with it.

Then I wanted to show you this tree*: 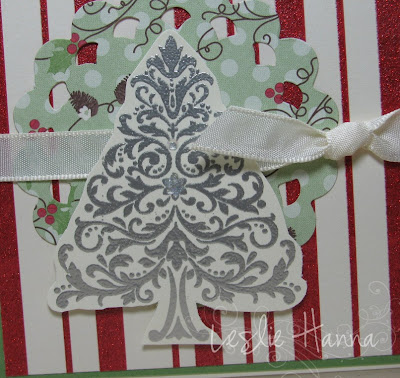 so I embossed it in silver and it's actually a matte finish compared to that SHINY glimmer paper. Plus, the tree needed some contrast against that red stripey stuff, so I cut some of another piece of paper from the same pack with a scallop circle from the Bigz L Pennant die. I added the ribbon and bling (like it wasn't shiny enough) and called it done. No, actually I added some of the Dazzling Detail stuff to two spots on the tree, because I could, THEN I called it done.

You Demos out there may want to use this card as an example of how NOT to mix papers. Or, then again, I may have just invented a new fad: putting weird papers together that don't really go together, and saying we meant to do that.

I think it's time for me to leave the craft room for the day, don't you? I have laundry to do, and maybe I'll pay some bills, just to try to get a grip on reality. Yeah, that sounds good.

* The tree is from the Bright Hopes set, same as the wreath I used on this card the other night.
Posted by Leslie Hanna at 6:19 PM